Summer reading information and booklists for WSA students in grades 6-12 in Fall, 2020.

The summer reading assignment gives IB Language and Literature students the opportunity to view documentaries and read novels or short story collections that share a common topic or theme. The summer reading assignment document and submission of assigned work will be in Ms. Garvin's Google Classrooms for 11th Grade and 12th Grade.  Links to these classrooms will be made available in June 2020.  Summer reading materials will be used in the first three weeks of classes in September 2020.

Students have four options for a documentary to view and a paired fiction title to read with it:

Option 2: Won't You Be My Neighbor, paired with Cat's Cradle, by Kurt Vonnegut

Option 3: Ken Burns: The Dust Bowl, paired with Whose Names Are Unknown, by Sanora Babb 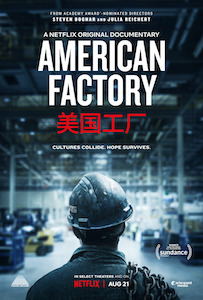 Summary: In post-industrial Ohio, a Chinese billionaire opens a new factory in the husk of an abandoned General Motors plant, hiring two thousand blue-collar Americans. Early days of hope and optimism give way to setbacks as high-tech China clashes with working-class America.

Option 2: Won't You Be My Neighbor, paired with Cat's Cradle, by Kurt Vonnegut 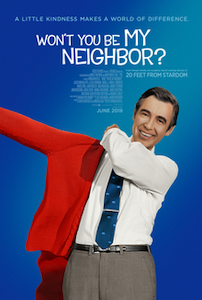 Summary: Won’t You Be My Neighbor? tells the story of a soft-spoken minister, puppeteer, writer, and producer whose show was beamed daily into homes across America for more than 30 years. In his beloved television program, Mister Rogers’ Neighborhood, Rogers and his cast of puppets and friends spoke directly to young children about some of life’s weightiest issues in a simple, direct fashion.

Fred Rogers’ career represented a sustained attempt to present a coherent, beneficent view of how television could be used as a positive force in society. Won’t You Be My Neighbor? explores his legacy, focusing on his radically kind ideas.

Option 3: Ken Burns: The Dust Bowl, paired with Whose Names Are Unknown, by Sanora Babb 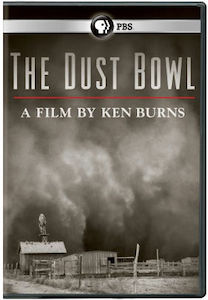 The Dust Bowl, is a two-part documentary series by Ken Burns, that originally aired November 18 and 19, 2012,  on PBS, was directed by Ken Burns and produced by Ken Burns, Dayton Duncan, and Julie Dunfey.  Episode 1: The Great Plow Up: 1 hour, 51 minutes.  Episode 2: Reaping the Whirlwind: 1 hour, 52 minutes. Available on Amazon Prime Video.

Summary: The Dust Bowl chronicles the worst man-made ecological disaster in American history, in which the frenzied wheat boom of the "Great Plow-Up," followed by a decade-long drought during the 1930s nearly swept away the breadbasket of the nation. Vivid interviews with twenty-six survivors of those hard times, combined with dramatic photographs and seldom seen movie footage, bring to life stories of incredible human suffering and equally incredible human perseverance. It is also a morality tale about our relationship to the land that sustains us—a lesson we ignore at our peril. More information can be found on the PBS website: The Dust Bowl: A Film by Ken Burns. 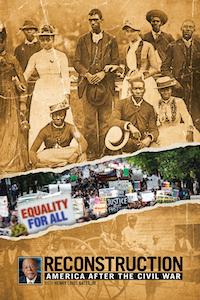 Summary: The series explores the transformative years following the American Civil War when the nation struggled to rebuild itself in the face of profound loss, massive destruction, and revolutionary social change. The twelve years that composed the post-war Reconstruction era (1865-77) witnessed a seismic shift in the meaning and makeup of our democracy, with millions of former slaves and free black people seeking out their rightful place as equal citizens under the law. Though tragically short-lived, this bold democratic experiment was, in the words of W. E. B. Du Bois, a ‘brief moment in the sun’ for African Americans, when they could advance, and achieve, education, exercise their right to vote, and run for and win public office. The first two hours of the series centers on this pivotal decade following the rebellion, charting black progress and highlighting the accomplishments of the many political leaders who emerged to usher their communities into this new era of freedom.

The series’ second half looks beyond that hopeful decade when the arc of history bent backward. It became increasingly clear that many Southern white people were never willingly going to accept this new social order and that the federal government was not prepared to provide African Americans with consistent or enduring protection of their new rights. More information can be found on the PBS website: Reconstruction: America After the Civil War. 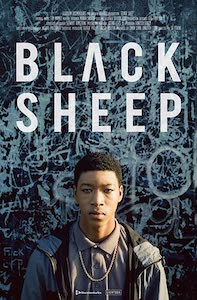 Summary: Everything changed for Cornelius Walker on November 27, 2000, when Damilola Taylor was killed. Damilola was 11, the same age as Cornelius. He lived five minutes away. He had the same skin color. Cornelius’s mother, scared for her son’s safety, moved their family out of London. Cornelius suddenly found himself living on a white estate run by racists. But rather than fighting them, Cornelius decided to become more like the people who hated him. They became his family and kept him safe. And in return, Cornelius became submerged in a culture of violence and hatred. But as the violence and racism against other black people continued, Cornelius struggled to marry his real identity with the one he had acquired.