Find Shakespeare's plays in the WSA Library, and also see: 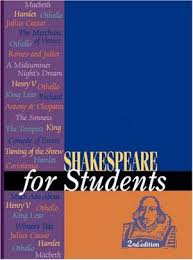 Shakespeare for Students:  Each entry includes an introduction; a plot synopsis; a character list; a discussion of the work's principal themes; information about the style and literary devices used; a conversation about the work's historical context; and a critical overview.

The Comedy of Errors

The Merchant of Venice

The Merry Wives of Windsor

Much Ado About Nothing

Taming of the Shrew

The Two Gentlemen of Verona